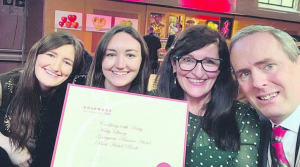 All proceeds from the eBook and 10% of proceeds from the printed book are kindly being donated to Irish Society for the Prevention of Cruelty to Children (ISPCC), as of 10th December over €15,000 has been raised.

Katy Lucey along with her daughters Jane and Ali from the Gougane Barra Hotel attended the prestigious award ceremony, as part of World Cuisine Week in Paris. They were honoured for their cookbook ‘Cooking with Katy – Recipes from Gougane Barra Hotel’.

‘Ali our youngest daughter suggested creating an eBook of their favourite recipes so Katy shared the recipes, Jane designed the eBook and I looked after all things technical’ Neil Lucey told The Southern Star newspaper.

They are donating all funds from the eBook and 10% of proceeds from the printed book to the ISPCC Childline and have already raised more than €15,000.

‘The book is a collection of personal family recipes from both sides of our family. There are no fancy ingredients or notions about it. It is possible to cook and bake simply and well. It had been a pleasure to share our much-loved recipes and we are delighted at the thought of being awarded such a high honour for something which started so simply in our family…’ Katy Lucey, speaking to the The Southern Star.

Both Neil and Katy of the beloved Gougane Barra Hotel, West Cork, have been friends of Lee Valley Ireland for over 30 years – they kindly opened their hotel to us for our 2021 and 2016 photoshoots; played Christmas songs and cooked a Christmas dinner in July for our shoot! Their son Conor is an established golf coach in the US, and we look forward to seeing his career progress. Big congratulations are due to sisters Ali and Jane Lucey on winning this accolade at the prestigious international event.

We are absolutely thrilled the Lucey family have won, and anyone who has visited the Gougane Barra Hotel will know it is very much deserved.

Copies of the eBook and printed book are available here.